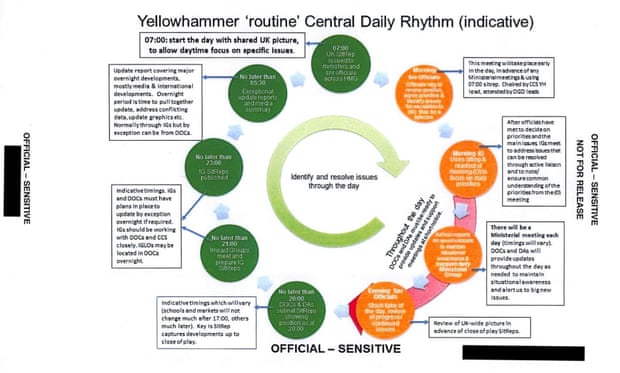 The extent and range of the impact of a no-deal Brexit is revealed in a confidential Cabinet Office document that warns of a “critical three-month phase” after leaving the EU during which the whole planning operation could be overwhelmed.

The classified document, seen by the Guardian, sets out the command and control structures in Whitehall for coping with a no-deal departure and says government departments will have to firefight most problems for themselves – or risk a collapse of “Operation Yellowhammer”.

“The … structure will quickly fall if too many decisions are unnecessarily escalated to the top levels that could have reasonably been dealt with internally …” the document says. It also concedes there are “likely to be unforeseen issues and impacts” of a no-deal Brexit that Operation Yellowhammer has been unable to predict.

The Cabinet Office has taken the lead in preparations for no deal and is desperately war-gaming scenarios in the event the UK leaves without a coherent plan.

The document includes a flow-chart of a routine no-deal day in Whitehall – which starts at 7am with “situation reports” from across the UK being sent to ministers and senior officials, and continues with non-stop assessments and meetings until 5.30am the following day.

This high tempo is likely to be necessary for months, the document says.

One source with knowledge of Operation Yellowhammer made clear that while planning had stepped up, the overall picture remained chaotic and “rudderless”.

Preparations for no deal have become time-critical because of the political deadlock at Westminster.

Kent county council has run “live” tests to see how schools, hospitals and morgues would cope with 10,000 lorries being parked on roads near to busy ports.

On Thursday it emerged that the Ministry of Defence has set up a bunker underneath its main building in Whitehall to coordinate any military response to Brexit.

The moves highlight growing concern about the disruption that could be caused by a no deal – with potential shortages of everything from medicines to fresh food and toilet paper.

In an attempt to mitigate these risks, the Cabinet Office has devised a “high-level concept of operations” manual for command, control and coordination by Whitehall for any problems that are likely to arise.

The Guardian understands this manual has been circulated to senior officials across government, but also to the 38 local resilience forums that will be charged with identifying and dealing with problems on the ground. Many of these LRFs may have to be led by senior police officers.

The document warns that agencies and government departments must assume they will be working non-stop for an extended period. The 12 high-risk areas that have been identified as being of particular concern include transport, healthcare services, and food and water supplies.

“Under the planning assumptions it is assumed that the command, control and coordination arrangements might last, during the critical phase, for a minimum of 12 weeks and might require 24/7 working for all involved departments and agencies,” the document says. “Some impacts may be felt for up to 24 weeks.”